Quizzes are not to all tastes, but this evening is more than just sitting around trying to answer questions on some obscure subjects. 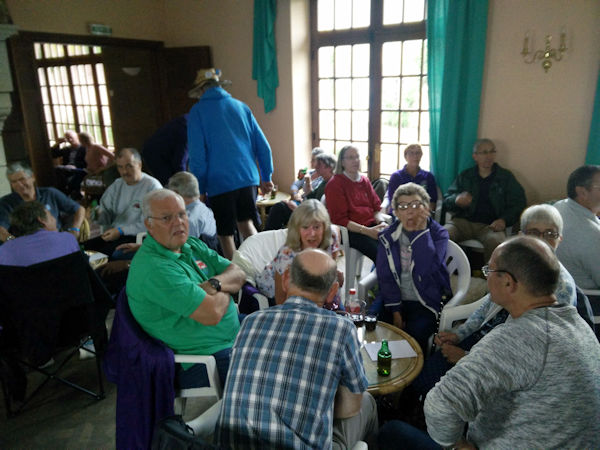 First and foremost it is hopefully a fun evening, the questions are not too difficult, and we do have a laugh, and a drink or two, on the way to the presentation of the prizes to the winners and runners up. Unlike more traditional quizzes, the adjudicator's decision is never final, and there will generally be much 'negotiation' around what constitutes a correct answer coupled with some cheating and the occasional bribery allegation.

There is a small charge for taking part, but all proceeds go to the rally's nominated charities, and the question setter traditionally provides the prizes. In recent years we've had a departure from the accepted format of four or five rounds of general knowledge and themed questions. In their place was a music quiz, music from all eras, classical, folk, pop, etc., with a mix of spoken questions, and recorded music to identify. It seemed that everyone enjoyed themselves, so we repeated the format and now audio rounds are a staple.

Thursday evening is usually set aside for our annual MOT evening meal. Either in the form of a multi-course dinner or a buffet, this is usually the last opportunity for all participants to get together as Friday night is normally left clear for those leaving on Saturday to pack up ready for the trip home. 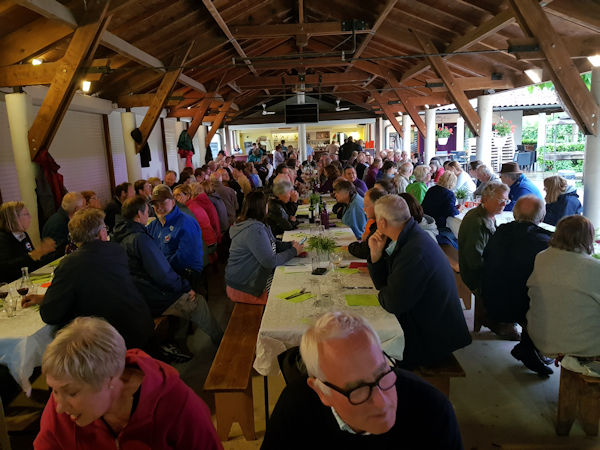 Traditionally this forms part of the evening when we all sit down to a meal, and prizes are awarded for all manner of reasons - for the cars which the organisers would most like to take home, for things that have happened during the week, either serious or just plain silly, or for anything the organisers think appropriate, or not, as the case may be! These prizes are normally in the form of car registration number plates with 'MOT' and the year of the trip i.e. 'MOT 2003'. Simple as these awards are, they are restricted in number, and are therefore highly prized by recipients. They have been awarded for many things over the years, from the best rescue of a stranded participant, to the chap who left his passport at home, or the best fancy dress, the tattiest Minor on the campsite, and to the youngest participant and to the eldest.

Every year someone comes up with an idea for something to do during the holiday; whether its a visit to the local mushroom mines, or a walk in the hills, such events are always well supported. On occasion events have been organised, or should we say disorganised, in the name of silliness.

As the saying goes, 'there's always one, isn't there?'. Well, in many cases, just a daft conversation gives rise to some form of sillyness which becomes infectious, and instead of there being just 'one', there's several. 'Le Stroll' was born of the imagination of several daft 'one's'. Dressed in absolutely unsuitable attire - totally inadequate shoes, knotted hankies, and sporting various acoutriments which might just come in handy during this ardious event, participants set off on an expedition so see how slowly they could cover a carefully planned route - round the campsite! Feeding stations (beer), rest stops (foot baths, damp towel and impromptu showers) were available on the route, and a good laugh was had by all who took part. The trip charities derived benefit from donations 'extracted' from all those not wise enough to have gone out for the day.

The following year, the formula was repeated, only this time it was 'Le Shuffle'. Carpet slippers, crutches, bandaged appendages, everything done to make participants as bonkers as those who dreamed it up. More money for the charities.

'Nail Banging' has proved popular each time someone has been daft enough to suggest it, and various halfwits have taken away assorted bruises to prove their competitive spirit, and the Auction Night is also good at providing a few laughs with yours truly having his shirt auctioned literally off his back.

On a more worrying note, a spate of gnome-gnapping has begun to rear its head during MOT week, along with kidnappings - and ransom demands - for patio furniture. Culprits will be tracked down and severely fined (so that's me hiding in me tent then...)

One of the rituals during the week is fondly entitled 'Le Drive', and here's our late friend Ian's view on it

Following directions on a printed route, this is a chance to see the countryside, towns and villages in the area around our campsite, and it's a chance to show off our Minors to the populace. All these 'funny little cars' - oh look!, there's one without a roof, and here comes one covered in wood! It all starts at the campsite where everyone is given a piece of paper and any last minute instructions before being sent on their way, spaced at regular intervals. The end of the route usually finds us at a place of interest, for instance a brewery, bell foundry, wine co-operative, beauty-spot, motor museum, distillery, car racing circuit, cheese or mushroom caves, whatever there is that will entertain, amuse or educate.

Starting in the morning, the drive usually lasts for an hour, or maybe a little more, and concludes, where possible, at about midday, just in time for lunch. It's normally very relaxed, and you can go at your own pace. There's no time limit unless something has been organised by way of guided tours at the place of interest. You are then free to explore as you wish. There is no specified route home, so again you are free to explore some of the places you passed through, or you can find another road back to the campsite.

On occasion, just to add a little spice to the drive, this has been in the form of a treasure hunt, one where the directions are interspersed with symbols which have to be deciphered and, to combat the 'I'll just follow the Minor in front' brigade, even one where alternate cars have different instructions. Carnage, cars passing each other in opposite directions, drivers and passengers with very puzzled looks on their faces and arguments abounding. There have been some unintentional errors in the instructions which have led to some interesting drives. 'Turn right' instead of 'turn left' was one such, and the vagaries of the Minor odometer have led to many missed turnings. On more than one occasion, sudden road closures or diversions, usually started during the early morning of the drive, have thrown the whole thing into utter chaos. The confusion caused when several Minors inadvertently turned up a narrow farm track, with nowhere to turn round, made for blue air, comments about the lineage of the organiser and interesting tales back on the campsite.

From my own experience of Le Drive, the 'occasional mistaken instruction' has become so prevalent that it now seems like a compulsory element, and it seems to be the rule rather than the exception to come to a junction and meet a Minor going in the opposite direction, completely confident that they're right and you're wrong.

I couldn't have put it better! One of my favourite memories of Le Drive is cresting a hill in a group of half a dozen Minors and catching sight of a large roundabout with five exits at the bottom. As we descended the hill, we watched a Minor approach the roundabout from every direction, all do a lap or two of it, and all disappear in different directions from it!

It never ceases to amaze us at how much talent and generosity there is out there in the MOT community. Every year participants provide us with items which they have made, or had made, and donated for us to auction - all in the name of charity. Occasionally there have been rare items, Minor or motoring memorabilia, and the like, which have also been most welcome. 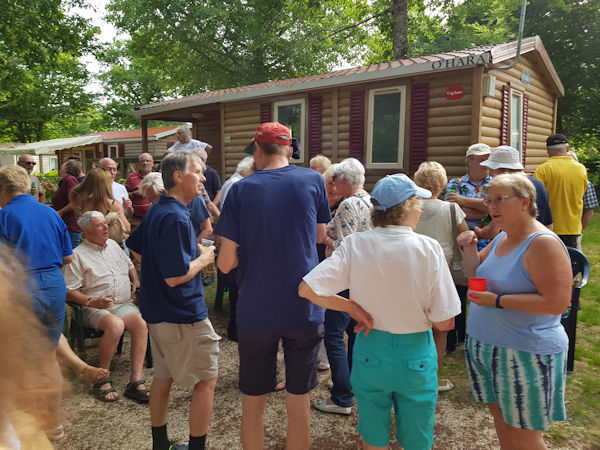 Whilst we very much appreciate anything which is donated to us for the auction, most buyers like to feel that what they have bought is unique, and will be a lasting memory of their holiday with their friends.

This traditional part of MOT started in 1990 when the trip went for the first time to the Loire Valley in France. One of our lady members painted a water-colour of a few wild flowers whilst we were in Amboise, which was auctioned during our annual get-together evening meal in a restaurant in the town. We were spread over three interconnecting rooms so the auction was an interesting experience. It did raise a considerable sum for the trip charity, and so started something which over the years has raised a tremendous amount of money for worthy causes.

Since then the number of donated items has risen, often to around 30, and now we usually raise about £2000 during an evening set aside specifically for the Auction.

If you would like to donate an item, we would ask you to bring it along on MOT, and give it to the organisers as soon as practical. The only other thing we would ask is that you to remember is that it shouldn't be over-large, or too delicate; you have to get it there and the purchaser has to get it home.

Over the years we have bought items from the auction, and are they are all constant reminders of some of the best holidays we have ever had. These include applique cushions depicting the front and rear of a Minor Saloon exactly the same as one of ours, an applique tea cosy, a cross-stitch cushion detailing all of the MOT venues, a wall clock whose face is a cross-stitched Minor Traveller, a bowl of hand-carved wooden fruit, a decoupage picture depicting the cartoon which was drawn especially for the MOT to the South of France in '95, and more recently a pastel drawing of a Thames Sailing Barge, and, from the 2003 trip to Brittany, a framed cross stitch.